Map of the Armenian Genocide 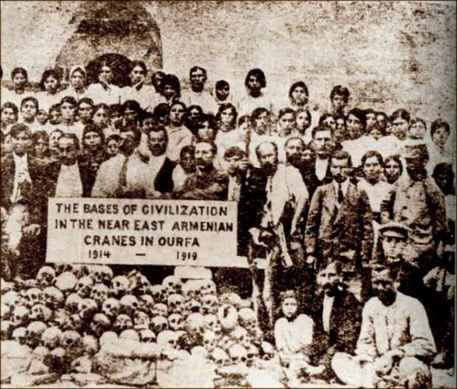 Armenians are an ancient people who have existed since the first century C.E.

1453 – Ottoman Turks establish the Ottoman Empire. Armenians are treated as second class citizens. They could practice Christianity but had to pay extra tax and faced discriminatory laws.

1894-1896 - “Hamidian Massacres” - 100,000 to 300,000 Armenians are killed under Abdul-Hamid II, the last Ottoman Sultan. Massacres were a response to Armenian protests to discriminatory laws and taxes. Purpose was to frighten, quell their desire for power, and/or force them to leave/convert.

1908 - Committee of Union and Progress (CUP) overthrows the sultan. They were the main group within the Young Turks. The Ottoman constitution is proclaimed.

1909 - Massacre at Adana. The Armenians had supported the overthrow of the sultan and thought the days of violence were over. However, the tension roots in political, economic, and religious differences boiled over yet again in the form of massacres against the Armenians. 30,000 were brutally murdered.

1912-1913 - Ottoman Empire is known as “The sick man of Europe” after suffering land losses in the Balkan Wars. The three pashas (Talaat, Djemal, and Enver) become the triumvirate rulers. They believe in a "Pan-Turkish" state.

1914 - Ottoman Empire enters WWI fighting against the Russians. (Russians had historically helped the Armenian cause. Armenians lived on both sides of the battle lines and served as soldiers). Armenians were used as a scapegoat and blamed for military loses to the Russians (they were accused of being spies). The Young Turk dictators saw the perfect opportunity to solve the “Armenian problem” once and for all. The Turks begin by disarming the entire Armenian population. 40,000 Armenians who were serving the Turkish army were formed to work as human pack animals or sent into battle unarmed. Şükrü Kaya, under assignment for the Young Turks, opens new orphanages in preparation for children becoming orphaned in future warfare. Telegrams are now sent to the governors with orders to begin the elimination of the Armenian people.

April 24, 1915 -  (Eve of Easter Sunday) - Now commemorated as the beginning of the Armenian genocide. Civil leaders, intellectuals, doctors, businessmen, and artists were rounded up and killed. Soon after many Armenian men were executed. Women and children were put on trains headed for the Syrian Desert or on death marches known as tehcir.

“It seemed as if on one night, all the prominent Armenians of the capital – assemblymen, representatives, progressive thinkers, reporters, teachers, preachers, doctors, pharmacist, dentist, merchants, and bankers – had made an appointment in those dim cells of the prison where they were brought.”   - (Never Again, Again, Again...)

Talaat Pasha - Minister of the Interior and the most influential leader in the CUP.

Enver Pasha - Minster of War and lead the revolution to overthrow Abdul Hamid. He described himself as a Turkish combination of Napoleon and Frederick the Great.

Djemal Pasha - Minister of Marine who was in charge of arresting all those who opposed or resisted the government.

Children's Lives During the Genocide

Women were subjected to sexual violence. Women and children were abducted and sold. Children were sometimes adopted and raised by Turkish Muslim families.

July 10, 1915 - Talaat orders children under age of 10 to be adopted by Muslim families. Those who could not afford another child were given an allowance of 30 cents per month per child. These adoptions were closely monitored by the government (more popular in the countryside). Armenian children often became servants of these families.

July 12, 1915 - Talaat orders the children likely to become parentless during the Armenian deportation into orphanages (orphanages worked best in cities).

Turkish physicians also poisoned children. Example in Agn, Khapert province 500 orphans were poisoned by a local pharmacist and physician. Dr. Ali Saib, Director of Public Health in the Trazbon province systematically murdered infants this way. He also ordered drownings in the Black Sea for those who refused to take his “medicine”.

In “The Death March” more than a million Christian women and children flee for weeks over mountains and deserts where they are often stripped naked, preyed upon, raped, tortured, and abused. Many take their own lives by jumping off cliffs into rivers. Anyone else left surviving would be put into concentration camps similar to what Jews would later experience.

After the deportations when there were many orphans,Talaat ordered that the ones who couldn’t remember what happened to their parents would be kept. The others were deported or drowned.

While Armenians were being deported, “children were often left near mission stations or given to the missionaries for protection” (Lewy 236).

Committee of Union and Progress (CUP) - the main sub-group of the Young Turks.

Genocide (According to the UN)- "The deliberate and systematic destruction, in whole or in part, of an ethnic, racial, religious, or national group. Any of the following acts committed with intent to destroy, in whole or in part, a national, ethnical, racial or religious group, as such: killing members of the group; causing serious bodily or mental harm to members of the group deliberately inflicting on the group conditions of life, calculated to bring about its physical destruction in whole or in part; imposing measures intended to prevent births within the group; [and] forcibly transferring children of the group to another group." - UN Convention on the Prevention and Punishment of the Crime of Genocide (1948)

Hamidian Massacres - 100,000 to 300,000 Armenians are killed under Abdul-Hamid II, the last Ottoman Sultan. Massacres were a response to Armenian protests to discriminatory laws and taxes. Purpose was to frighten, quell their desire for power, and/or force them to leave/convert.

Kıtal - “massacre” or “mass killing,” Ottomans began using this term after World War I to describe the atrocities committed against the Armenians during the forced deportation

Ottoman Empire - “The Muslim empire of the Turks (1299–1922), established in northern Anatolia by Osman I and expanded by his successors to include all of Asia Minor and much of south-east Europe. Ottoman power received a severe check with the invasion of Tamerlane in 1401, but expansion resumed several decades later, resulting in the capture of Constantinople in 1453. The empire reached its zenith under Suleiman I (1520–66), dominating the eastern Mediterranean, including North Africa, and threatening central Europe, but thereafter it began to decline. Still powerful in the 17th century, it had, by the 19th century, become the ‘sick man of Europe’, eventually collapsing in the early 20th century.” - Oxford Reference

Şükrü Kaya - (1883–1959) general director for tribes and migrants, assigned the task of opening new orphanages in preparation for war

Young Turks - “A number of late 19th- and early 20th-century reformers in the Ottoman empire who carried out the Revolution of 1908. The most prominent party was the Committee of Union and Progress, which seized power in 1913 and (under the triumvirate of Enver Pasha, Talat Pasha, and Jamal Pasha) ruled the Ottoman empire until 1918, supporting the Central Powers in World War I.” - Oxford Reference 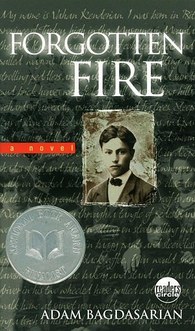 "In 1915 Vahan Kenderian is living a life of privilege as the youngest son of a wealthy Armenian family in Turkey. This secure world is shattered when some family members are whisked away while others are murdered before his eyes."

"Vahan loses his home and family, and is forced to live a life he would never have dreamed of in order to survive. Somehow Vahan’s incredible strength and spirit help him endure, even knowing that each day could be his last." 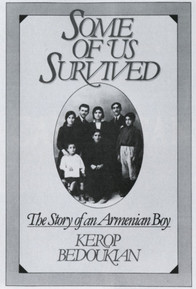 Bedoukian, Kerop. Some of Us Survived: The Story of an Armenian Boy . New York: Farrar Straus Giroux, 1979. Print.


"This is the story of an Armenian boy who was about eight years old during the 1918 Turkish slaughter of Armenians. He tells about his father being taken away, never to be seen again, and about his experiences as a refugee. Though he wrote the book as an old man, he relates the events with the innocent perspective of a child, which made it very readable and poignant." 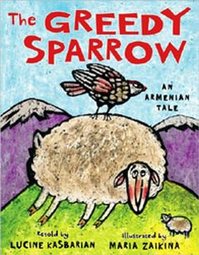 "Once there was a sparrow who caught a thorn in his foot. When a kind baker removes the thorn, the sparrow tricks her into giving him some bread. Each time the sparrow meets new people, he tricks them out of bigger and better things. Will the sparrow’s greed get the best of him? Through this endearing Armenian folktale illustrated with mixed media, readers will learn that people who engage in dishonest or selfish behavior may end up losing whatever they gained because of that behavior."

The Road From Home - David Kherdian 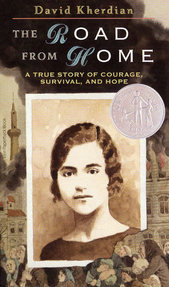 "David Kherdian re-creates his mother's voice in telling the true story of a childhood interrupted by one of the most devastating holocausts of our century. Vernon Dumehjian Kherdian was born into a loving and prosperous family. Then, in the year 1915, the Turkish government began the systematic destruction of its Armenian population." 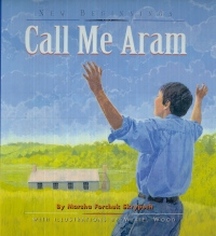 "Aram Davidian, like his fellow orphaned Armenian refugees, is delighted with his new home on a farm in Georgetown, Ontario. But despite the excitement his new surroundings, Aram worries about his young friend Mgerdich, who was injured on the long trip to Canada and is recovering in France. And what is more worrying is that he and the other boys have been assigned new English names. How will their extended families find them one day if all the boys have new identities? Even when their translator assures them that their hosts want only the best for the boys, Aram cannot accept the name David Adams. When Mgerdich finally arrives at the farm, a relieved Aram finds the courage to lead the boys in a gentle revolt. Together, they must find a way to convince the Canadians adults that the boys, as grateful as they are for their new lives, they cannot forget their old ones. They must keep their names."

“ Who, after all, speaks today of the annihilation of the Armenians?" - Hitler

“Bearers of an impressive martial and cultural history, the Armenians had also known repeated trials and tribulations, waves of massacre, captivity, and exile, but even in the darkest of times there had always been enough of them remaining to revive, rebuild, and go forward” (Hovannisian 3).

“The combination of a xenophobic nationalist mindset and a total war ethic produced a lethal atmosphere from which the Armenians could not escape” (Hovannisian 3).

“One may conclude based on the available information that the Armenian Genocide was indeed premeditated but not necessarily inevitable” (Hovannisian 14). 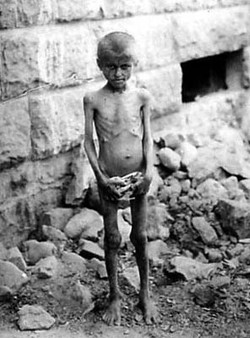 1.  April 24, 1915 marks the start of the Armenian genocide. Being mindful of this date, which is Easter Eve, do you think that it has any symbolic meaning behind it? For example: Do you believe this day was specifically chosen?


“The Turkish people believe that what happened to the Armenians was not genocide. It was relocation to another part of the Ottoman Empire of only eastern Anatolian Armenians with an aim of creating an independent state of their own in areas where they were only in minority by ethnically cleansing the majority of the turks”

2. The Armenians are not content with the words tragedy, or catastrophe disaster, but insist on the phrase genocide? Why do they prefer this word choice?

i.      Catastrophe/Disaster – an event causing great and or often sudden damage or suffering or loss of life
ii.      Tragedy – an event causing great suffering, destruction, and distress such as a serious accident, crime, or natural catastrophe
iii.      Genocide – The deliberate killing of a group of people, esp. those of a particular ethnic group or natural
3.     Scholars argue that this era cannot be considered a genocide because the term was not even around during the time it happen. Do you still consider it a genocide?

a.       The date it occurred
b.      The people it affect (if it was natural or a sudden damage, would it have just affected one ethnic group)

4.       Within the Armenian Genocide, many people died of heat and sun exposure, cold windy nights, starvation, disease, horrible sanitation. Is genocide strictly the terms of definition or can be in defined in other aspects?